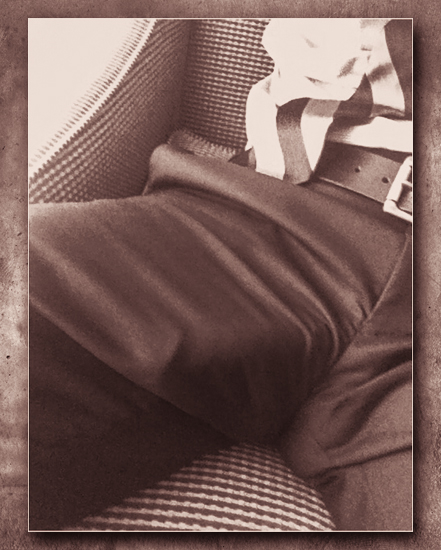 Considering my photo below, there are circumstances where I could be wearing far less and it would be seen as more socially acceptable. If I were at the beach, shooting hoops at the park with no shirt on, or at the pool getting in a swimming workout; I would be revealing much more than is shown in this photo. Yet, this image here on WordPress might be seen as bit provocative.

Wearing our clothes in a revealing way is one form of exhibitionism. On another level, individuals and couples experience exhibitionism through nudity and self-pleasuring/sex when others may be watching. Do you find yourself aroused thinking about being intimate with your lover in a public space where you may be seen or “caught”? This is one of the most common fantasies couples have and the one most often made a reality.

What is it about being potentially caught in the act that’s such a turn-on? Some psychologists theorize the appeal of exhibitionism may be strongly related to our first youthful orgasmic experiences (alone and/or with your childhood sweetheart) and the fear of being caught. If you think about the first time you masturbated, had sex in a car, or had sex in your parent’s home; you probably had at least some angst around your parents, siblings, friends, or even the police catching you. The association of sexual release and being caught often form a powerful link within us at an early age. Exhibitionism taps into this link formed in our teens.

For others, the thrill of exhibitionism is grounded in power. A man may feel a sense of power when he sends (prematurely) a “cock shot” or “dick pic” in a text or email to a woman. Many (but not all) women find this distasteful. Personally, I’m amazed at the high percentage of men using cock shots as their main profile photo on adult dating sites despite the deafening roar of women to not do so. I’ve even see a few on WordPress as well. Not surprisingly, there aren’t a lot of comments on those photos. A lack of artistic presentation and absence of context may be contributing factors. Women, though less frequently, may also use exhibitionism to elicit the sensation of power. All of this said, power can be a driver but is not the only driver behind exhibitionism.

This post serves as a launching point for future stories with robust roots buried deep in exhibitionism and will be updated as I make new discoveries. In the mean time, I’m just going to innocently take a seat across from you and take care of few emails. I hope you don’t mind.

193 thoughts on “Exhibitionism – Exploring the Layers”