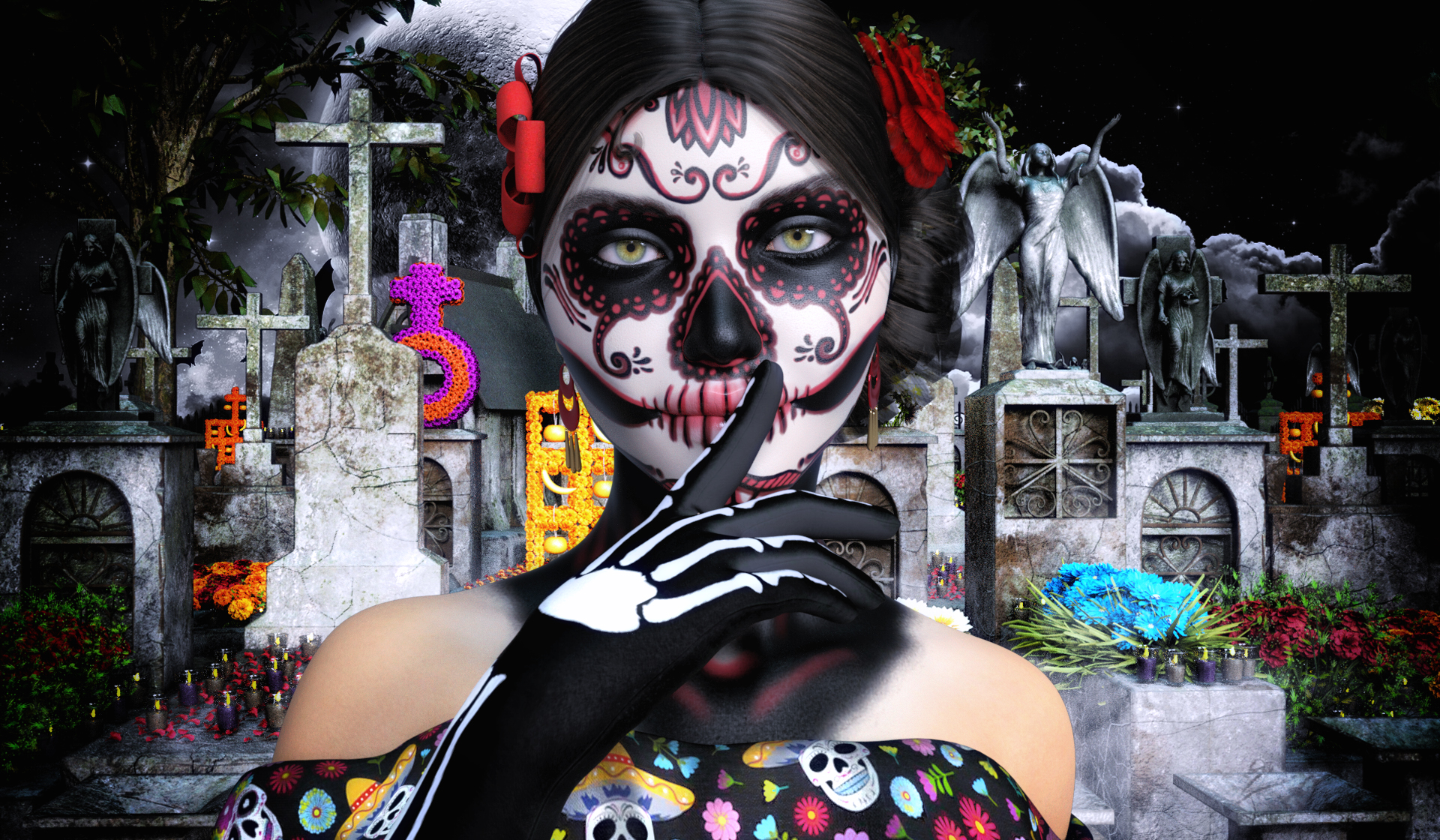 Dia de los Muertos (Day of the Dead) is a Mexican holiday which blends ancient Aztec and Christian spirituality. The belief is that the wall between the living and the dead is thinnest around November 1st and this allows the dead to cross over to the land of the living. Day of the Dead is a spiritual celebration focused on remembering and honoring deceased loved ones.

A lot of thought and preparation goes into Dia de los Muertos. Probably the most recognized of this preparation is the makeup, flowing ball gowns and suits worn by pariticpants, especially by young women and men.

This appearance is in large part inspired by La Catrina, a cartoon character created by the artist Jose Guadalupe Posada in the early 1900s. His work was inspired by earlier artistic and sculptural representations of the Aztec goddess of the Underworld and Lady of Death known as Lady Mictecacihuatl.

The Aztecs believed a person, after dying, had to pass through nine realms before their soul could reach Chicunamictlan, the Land of the Dead, their final resting place. The Aztecs believed this journey took several years to complete so family members provided provisions to help their loved ones successfully navigate this journey. This Aztec connection is significant as Dia de los Muertos is thought to date as far back as 1000 BCE before being fused with Christianity after the Spanish conquest in the 1500s CE.

If we believe the souls of our loved one are returning for a fun visit, it makes sense that we would want to make special preparations for their gravesite and at home with a decorated ofrendas (altar). At both locations, family members bring candles and bright flowers such as marigolds. The brightness of the lights and flowers serve as beacons in the night to guide deceased loved ones home. Additional items include photos, favorite possessions, food, and beverages are placed on graves and ofrendas.

As I think about this tradition and the loved ones I have lost, I can see the appeal of this celebration…especially if everyone in the community is doing it and creating a festival out of the experience. I think about the fun reminders I would gather for my deceased mother…mementos, photos, flowers, food and drink. I would travel to her gravesite to light candles and spread everything out around her grave. I would then pull up a chair to sit, reflect, and honor her memory by sharing favorite stories and memories. All around me, others would be doing the same thing at different grave sites. I might walk around and visit other graves and ask people to share their stories.

Together, we celebrate the lives of those we loved and how they lived.

The connection between Day of the Dead and Halloween is not as linear as I had anticipated. Halloween, in its commercialized mainstream form in America, is celebrated with little to no spiritual meaning. There is a faint awareness that the spirits of the dead may be wandering amongst us so we dress up in costumes to blend in with them and avoid detection. It certainly isn’t a time dedicated to remembering lost loved ones. If I dig a little deeper though, there are connecting strands that link the underlying (but now lost) spiritual connection of Halloween and Dia de los Muertos.

I’m going to leave a few bread crumbs here and pick up this path of exploration as time allows:

2 thoughts on “Dia de los Muertos (Day of the Dead)”