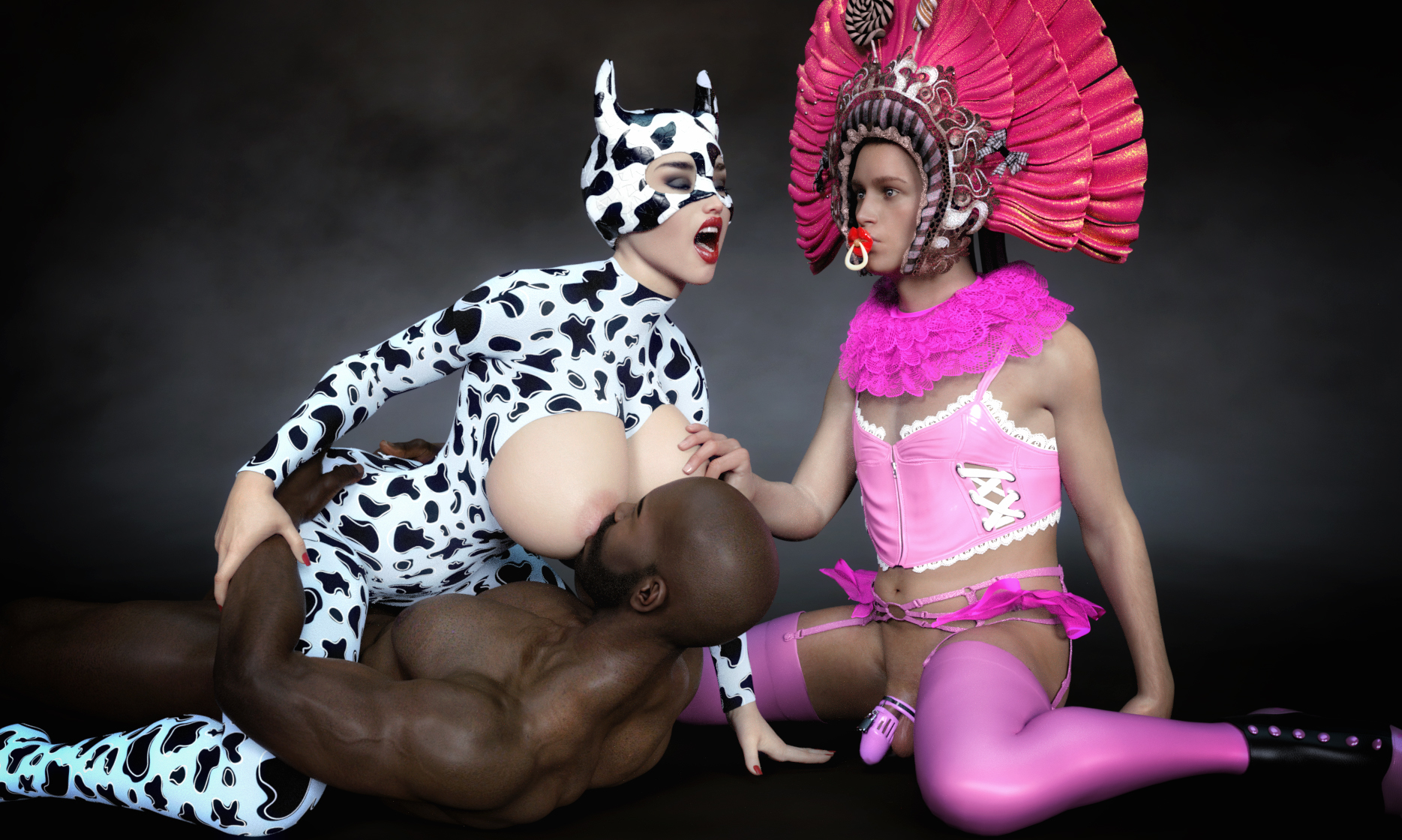 I recently received a commission for an interesting set of “HuCow” or human cow images from Petra and Iven. Today, I’m sharing a few of those commissioned images and looking at the underlying sexual drivers of this fantasy. My next post in this series will focus on their real-life experience as HuCow practitioners.

When first presented with this opportunity, I wasn’t sure if I could do it or not. I had caught glimpses of this fetish before but, admittedly, knew little about it. Naturally, I felt compelled to understand this kink on a deeper level and did some light research. My goal was identify the potential kinks at play in this patron’s request and then the potential psychological drivers flowing through the fantasy. I hoped to use this information, along with their description of the fantasy and real-life personal footage they shared, to enhance my art. Eventually, I felt comfortable enough to take on the project.

Before going further, take a look at this image and take a shot at counting the potential number of kinks flowing through this image.

Thank you for participating in the poll. Now, let’s dig a little deeper into the different potential fetishes at play here…and it is dripping with them.

Let’s start with what appears to be the core fetish at play – Human Cow or HuCow. Interestingly, it doesn’t appear to be the sexualization of a “cow” that drives the fantasy. Rather, HuCow is more like a package that allows so many others fetishes to be uniquely stuffed inside it.

Objectification/Sexual Objectification. Let me be clear before going further. I am discussing this within the context of sexual play between consenting adults. Objectification occurs when a person is treated as an object or dehumanized. For example, a woman that enjoys objectification may be used as a foot stool or lamp or displayed as a piece of artwork. Sexual objectification follows this same behavior for sexual purposes.  Being sexually objectified is a fetish some women find extremely arousing.

If you are a woman reading this, you may be scoffing at the notion of being treated like a cow with your breasts handled like udders. I understand that, most of us understand that. At the same time though, looking at the image below, I know a few of you have found it arousing to think about being served up like a dish on the table for multiple men to sexually devour. It flows in the same current of energy but is manifested in a different manner.

Even more women enjoyed the Fuck Doll fantasy post. In this fantasy a woman is treated as a fuck toy by her lover or multiple men…used as a receptacle for their sexual pleasure.

Equally compelling to some women was the The Wall post. The woman’s pussy (and ass) literally serve as inviting holes in the wall for men, one after the other, to fuck for their own pleasure with no regard to who she is a person. Keep in mind though, our dirty little secret is that the women who participate in such scenes (or fantasize about them) find this immensely arousing.

In both The Fuck Doll and The Wall, women are embracing the fullness of their sexuality through submission and sexual objectification. As a submissive act, they are only obeying and pleasing their Dom or Sir and this gives them the psychological and emotional support and freedom to let go. Ironically, they ultimately find their sexual freedom in submission. Sexual objectification, in my assessment, is a form of submission and/or masochism.

Here are a few other fetishes flowing through Petra and Iven’s HuCow fetish but may not necessarily part of the core HuCow experience: