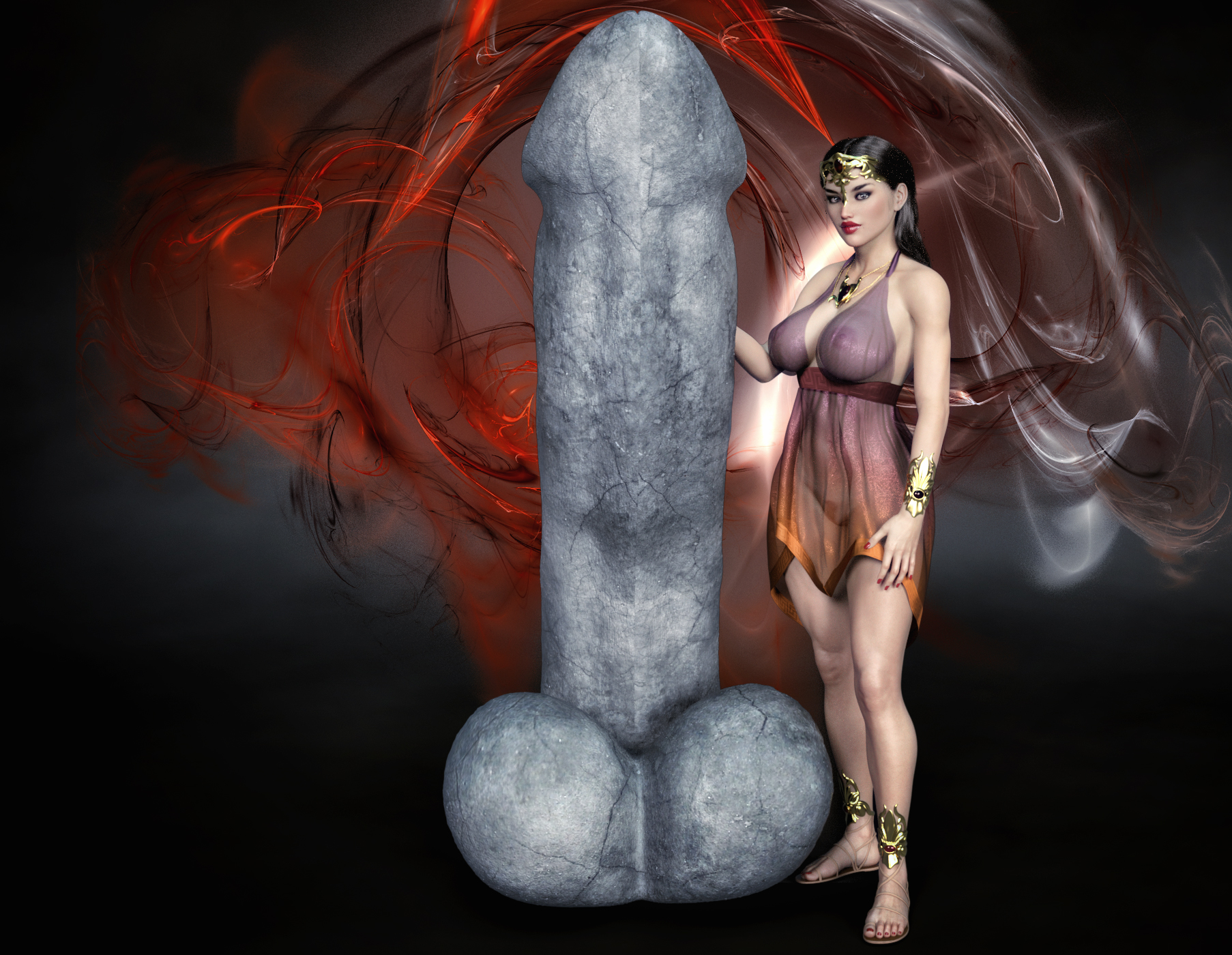 A large, erect phallus can symbolize power and overwhelming force, irresistible intoxication, and the mystery of sexuality. It can be frightening in its symbolism when viewed as representing male dominance and control over women in a patriarchal society. In contrast, it can be intoxicating to women who longing to express and experience the full potential of their sexuality and transcendent ecstasy. In ancient Greece, the erect phallus was one of several symbols associated with the worship of Dionysus – Greek god of wine, theater, and transcendent ecstasy. Statues of erect cocks were placed in ornate temples of worship devoted to Dionysus. Even today, some of those temple ruins are still visible.

While these temples were the socially acceptable way to worship Dionysus in “polite” society, the true worship of Dionysus was led by Maenads in the forest. Dionysus was a nature god after all. Women gathered in the forest often dressed in animal skin and wearing horns. They would erect wooden crosses and place a robe, mask, bull horns, ivy, and grapes on the cross (all symbols of Dionysus) to summon his presence. The women drank wine (the blood of Dionysus), performed sacred rituals, and danced themselves into an orgiastic frenzy. These ceremonies have been noted by historians (including Plato) as being highly sexual in nature.

Why was Dionysus so important to women? While we have made improvements in gender equality across different cultures, many of these advances have only come to exist within the last 100 years and, even in the most modern societies, there is still a long way to go. If this is the state of the world today, can you imagine how oppressive life must have been for women in 800 BC…almost 2,800 years ago? Women of this era were bound to household duties and were expected to follow, not lead. They were expected to be sexually passive and free of lust while men lived a life of sexual freedom. There were, however, a couple of exceptions to the oppressive status quo and they came courtesy of Dionysus.

Through the lens of ancient Greek culture, a behavioral and psychological spectrum existed with two gods on each end representing opposing forces of energy – Apollo and Dionysus. Apollo was the god of order, structure, science, and reason. Expressed in the modern world, Apollo is found in our social codes, our individual self concepts of identity, and behavioral norms of society. The opposite of structure is anti-structure (revelry, chaos, liberation, emotion, ecstasy, and inversion) and this is the realm of Dionysus. Dionysus represents the “born to be wild” state of mind that rebels against structure and all that oppresses and restrains us from returning to nature, seeking our natural state, and embracing our wild, primal desires.

Dionysus served multiple psychological and spiritual roles in Greek society and was often worshipped through one of the most powerful of all rituals, the psychological and emotional ritual of inversion. Rituals of inversion were practiced privately and also celebrated in large public festivals honoring Dionysus all across Greece. These festivals (such as the Dionysia) served as great levelers of society where all social barriers and status were dissolved. This means that some people rose in prominence and others were diminished. Slaves were exalted and free men were humbled. Man or woman, young and old…all return to a state of cultural indistinguishability and freedom.

During these festivals, women assumed the status and liberties enjoyed by men in Greek society. Female liberation involved the ritualistic invoking of Dionysus who liberated women from the societal constraints that oppressed them. This included sexual liberation and, in modern lingo, the ability to get wild and party! Festivals honoring Dionysus often began with a phallic procession. People lined the streets with loud music of the period filling the air, people screaming, wine flowing liberally, and people generally working themselves into a frenzy. In the procession, groups of people (mostly women) walked down the streets carrying large phallic symbols in honor of Dionysus.

What was the importance of an erect cock in these rituals? The Greeks interpreted erections as a sign of divine possession by Dionysus. Plato even referred to the erection as one form of divine madness. The phallus represented the surging of life, the need to gush forth, and seemed to have a mind of its own. Still today, we joke about erections as “thinking with the other head”. The Greeks were more literal about this. The erection was seen as a disobedient, self-willed animal that would not listen to reason. It takes possession of the owner and reduces him to a bestial state. This is why the phallus is often depicted in Greek art at zoomorphic – having animal characteristics/form. It is sometimes shown as a bird with wings, ears, and a single eye.

Likewise, the phallic tribute to Dionysus carried in processions was regarded as an independent living organism and often had an eye. The Greeks believed that through the eyes and phallus, we become possessed and surge forward to take possession. In these phallic processions, women were taking possession of the phallus and invoking the divine possession of Dionysus within themselves.

They sought the god’s presence and wanted to claim the wild, liberating power of Dionysus in order to step beyond the societal boundaries that oppressed them. Once possessed, expressions of joy and pleasure such as wild dancing and/or sex ensued as these women experienced the intoxicating, transcendent ecstasy of Dionysus.

In the midst of all this revelry, Greek literature never depicts physical harm occurring to women worshipping Dionysus. Instead, Dionysus is said to have actively protected the safety of women who possessed him.

Almost 2,000 years have passed since Dionysus faded from our collective consciousness and left us with a sense of cognitive dissonance. We understand societal expectations, but many of us still feel Dionysian energy swirling through our psyche that longs to burst forth. How many women and men still feel oppressed with no moments of liberation on the horizon? How many of us long to be free of societal judgement simply because we embrace our sexuality? How many women struggle with the homemaker dream of Hestia (Greek goddess of the home/hearth) but long to touch their inner Aphrodite (ref: Hestia vs. Aphrodite)? As an archetypal force, the presence of Dionysian energy may be needed more today than ever before. We just need to know how to find and tap into it.

Key Dionysus references used in this writing along with knowledge gained from countless other books and articles over the past few years in my journey for deeper understanding:

Interested in reading more about Dionysus? You can find it here –  Dionysus.