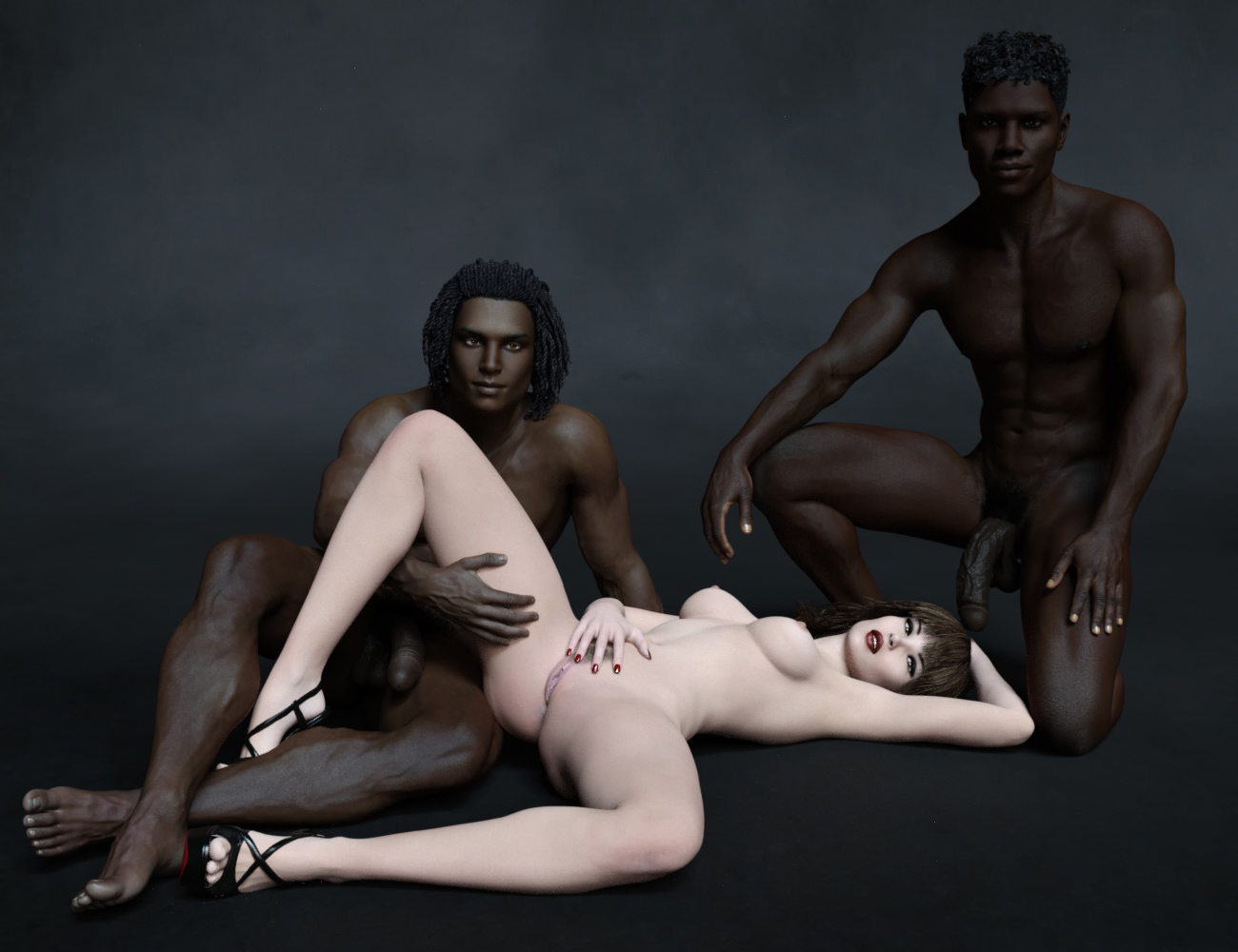 In Carol Ann – The Black Mystique (Part I), Carol Ann joined me for a discussion about interracial sex. She described her attraction to black men and we explored some of the psychology behind the allure of interracial sex. A secondary theme of sexual repression also emerged in the first part of our discussion. As our Part I wrapped up, Carol Ann was beginning to tell me about her lover – DeMarcus.

The artwork in this interview is a bit dated, but her confessions are as hot as ever.

We now continue with the rest of the interview.

Carol Ann: DeMarcus was a very creative and adventurous lover…the best I’ve ever had. I tell you, after feeling his magnificent cock opening me up and stretching me to my limit, I would do anything he wanted in order to please him.

Michael: I love how you phrased that. You went through a long dry period with no sex. I’m sure it felt amazing to be opened deeply and stretched so fully…to finally have a great sex.

Carol Ann: When he was inside me, he made me feel more like a woman than I have ever felt before in my life. He was adventurous too and that was very new and exciting.

Michael: What do you mean by “adventurous”?

Carol Ann: Well, DeMarcus enjoyed restraining me and took great pleasure in spanking my bottom. Sometimes he would even take off his belt and whip me with it.

Michael: Sounds like you really enjoyed being handled this way?

Carol Ann: Oh god, yes! Sometimes I would wince or even cry but it was always connected to pleasure. I felt like I deserved it. As amazing as DeMarcus made me feel, it wasn’t a guilt-free experience. I never went into my marriage thinking I would be an unfaithful wife. I just felt so neglected, and sexually stifled. My behavior bothered me and I think that is why I enjoyed being spanked – it was punishment for my wild desires. It also made him hot to handle a proper, married woman this way. I wanted to excite him and be his fantasy woman.

🔍 Carol Ann’s enjoyment bondage and discipline as a way to release her guilt so she could more fully enjoy the pleasure ahead is interesting. She also saw herself as fulfilling a fantasy of his – the untouchable, angelic goddess now dominated and submitting to him.

Michael: Has you husband ever spanked you?

Carol Ann: Oh heavens no, the thought of spanking me has probably never even remotely entered his thoughts. It would be a dream come true to have my husband spank me.

Michael: Why do you think your husband doesn’t spank you while DeMarcus loves it?

Carol Ann: My husband handles me like I’m a delicate flower. Even when have sex (which is rare), he is so gentle and passive. I just wish he would be more of man and take what he wants. I want him to be sexual and have fire in his loins for me. Spank my bottom and take me like a man!

🔍 I referenced this several times in part I of this interview, but the cognitive dissonance found in the Hestia vs. Aphrodite archetypes is so very real and still present in our minds today. Women struggle with the good girl – naughty girl constructs. Men also struggle with this as we seek a life partner. Finding balance is an ever-present challenge in relationships.

Michael: So, your enjoyment from spanking isn’t just about releasing guilt because you would also enjoy it from your husband? It sounds like it is also a bit about feeling sexually desired and wanting to have the sensation of being ravaged by your lover?

Carol Ann: Yes, I guess that is true. I hadn’t thought about it that way.

Michael: How did that first spanking with DeMarcus come about?

Carol Ann: He was taking me from behind and spanked my bottom. God, it made me so hot! I started pushing into him harder and taking him deeper. The more he spanked me, the wilder I became. It made me release so hard!

Michael: You liked this strong, dominating male presence…a real alpha male having his way with you. Would he also say naughty things while he was handling you this way? What did he say to you, Carol Ann?

Carol Ann: Yes, he often taunted me while spanking my bottom. He would call me names and make me say shameful things.

Michael: If you are comfortable sharing, I would love hear some examples.

Michael: What types of things did you say to him?

Carol Ann: God, I’m getting turned on now remembering. I would tell him that I was his white woman, that I loved his big black cock, and that he owned my white pussy.

Michael: Did all of this talk add to your arousal?

Carol Ann: Yes, very much so!

Carol Ann: Like I said before, I would have done anything to please him and if he wanted to share me with his friends, I told him I would do it. In those moments where he was dominating me, the thought of him and his friends using me to satisfy their manly needs took my sexual excitement to an even higher level. Even now, the thought makes me feel weak kneed.

🔍 The multiple-male fantasy appears on practically every list of top female fantasies. Women may not tell their lover this, but it shows strongly in anonymous surveys. Like most fantasies, it falls on a spectrum of behaviors. One one side, there is the fantasy of being a strong sexual goddess desired and pleased by many men as she quenches her desire and theirs. On the other edge of the spectrum is something I think of as the “Fuck Doll” fantasy. The woman desires to be submissive, sometimes humiliated, and “used” by the men for their sexual gratification. In other words, she wants them to treat her like their own personal fuck doll.

Michael: You felt a sense of taboo excitement with DeMarcus alone so I can see how the thought of having several men at once takes it to another level. Did DeMarcus ever provide you with this multiple-male experience?

Carol Ann: Yes, eventually he did invite several of his friends over and it became a regular part of our get togethers. The presence of these fit black men with very large cocks was nothing less than intoxicating. To see them all so strong and hard for me made me feel so desired and aroused.

Michael: Is there a particular memory from one of these moments that still excites you today?

Michael: You come across as so thoughtful and polished. This is quite a scene to imagine a woman like yourself being immersed in. Because it happened multiple times, is it safe to assume you enjoyed these moments and being treated this way?

Carol Ann: Oh god yes, I loved it! I’m getting excited all over again just sharing these memories.

Michael: When you were with these men, how would these sexual sessions end? Give me a sense of where the men orgasmed and how it was as the men or you left the room when it was over.

Carol Ann: You are asking some really intimate and detailed questions. I’m thinking you are really enjoying this?

Michael: Ha! I do have scholarly reasons for the questions. But, yes, your story is definitely turning me on!

Carol Ann: Good, it is exciting me to share this with you. I may have an exhibitionist streak. How would it end? The men would each take turns between my legs. One after the other, their strong, thick cocks would fill me with their wonderful sperm. It felt so amazing to bring these men to orgasm and feel them releasing inside me. With each successive entry, the accumulation of semen between my legs only enhanced the sexual energy for all of us. Sometimes the men would have a second or third orgasm and would finish in my mouth or on my chest. They seemed to prefer coming inside me though.

Michael: Whew, you sure have a way with creating visuals. Amazing! Such a hot scene to imagine these men, one after the other, releasing inside you and all over you.

🔍 There is some compelling literature on a subject called “Sperm Wars” that explains how the presence of other men ejaculating inside a woman generates a enhanced biological drive in other men leading to increased sperm production and the capacity for multiple orgasms in an effort to compete. This can certainly enhance the sexual energy in the room. To read more on this topic, please check out – Sperm Wars: Seeding Passion’s Flame.

Michael: So you are laying there with the sperm of several dripping out of you and all over your chest and face. How did these interludes actually end? What was the afterglow like?

Carol Ann: It was always very pleasant. DeMarcus’s friends enjoyed laying around and caressing me as we talked and laughed. I would always get warm wash clothes and clean them up as they rested, ensured they had some water, and pampered them. I was probably being too motherly, but I appreciated what they had done for me and wanted to pamper them a little. One by one, they would eventually get dressed, kiss me goodbye, and leave. They were sometimes rough during sex but were all really nice young men. DeMarcus and I would then have some alone time and usually had sex again. He liked being the last man to empty himself inside me. As I left, I always felt so desired and sexually fulfilled.

Michael: The quiet period after the sex is interesting. It seems to have been a very comforting, nurturing, and friendly space. How did you feel when you went home?

Carol Ann: I would freshen up before heading home just in case my husband was home early and shower again if he wasn’t there yet. My husband would usually arrive a couple hours later and, as usual, would ignore me all night. All the while, I am sitting near his side feeling so very alive, sexy, and satisfied with the sperm of multiple men inside me.

Carol Ann: It is hard describe how this felt. He denies my sexuality and ignores my needs so it is sort of like giving him the finger I guess. It isn’t just him though. It is everyone that has tried to control my life and define my sexuality.

Michael: You clearly broke free from all the sexually repressive forces around you and reclaimed your sexuality in grand fashion! Carol Ann, I think this is a perfect place to wrap this up. I want to thank you for your time and openness. Real-life experiences like yours help bring sexual psychology to life and in a way that is also very erotic too. I hope that as you go back to read and reflect on our discussion, you will have a greater sense of what drives your sexuality. You have also helped me and hopefully many others take a step forward in understanding the psychology behind this fantasy. You are beautiful, sexy, and vibrant woman. It has been a privilege ~ Michael

Carol Ann: Thank you, Michael! This was fun and has already been very eye opening. I’m looking forward to reading your finished work. Please do stay in touch! Affectionately – Carol Ann