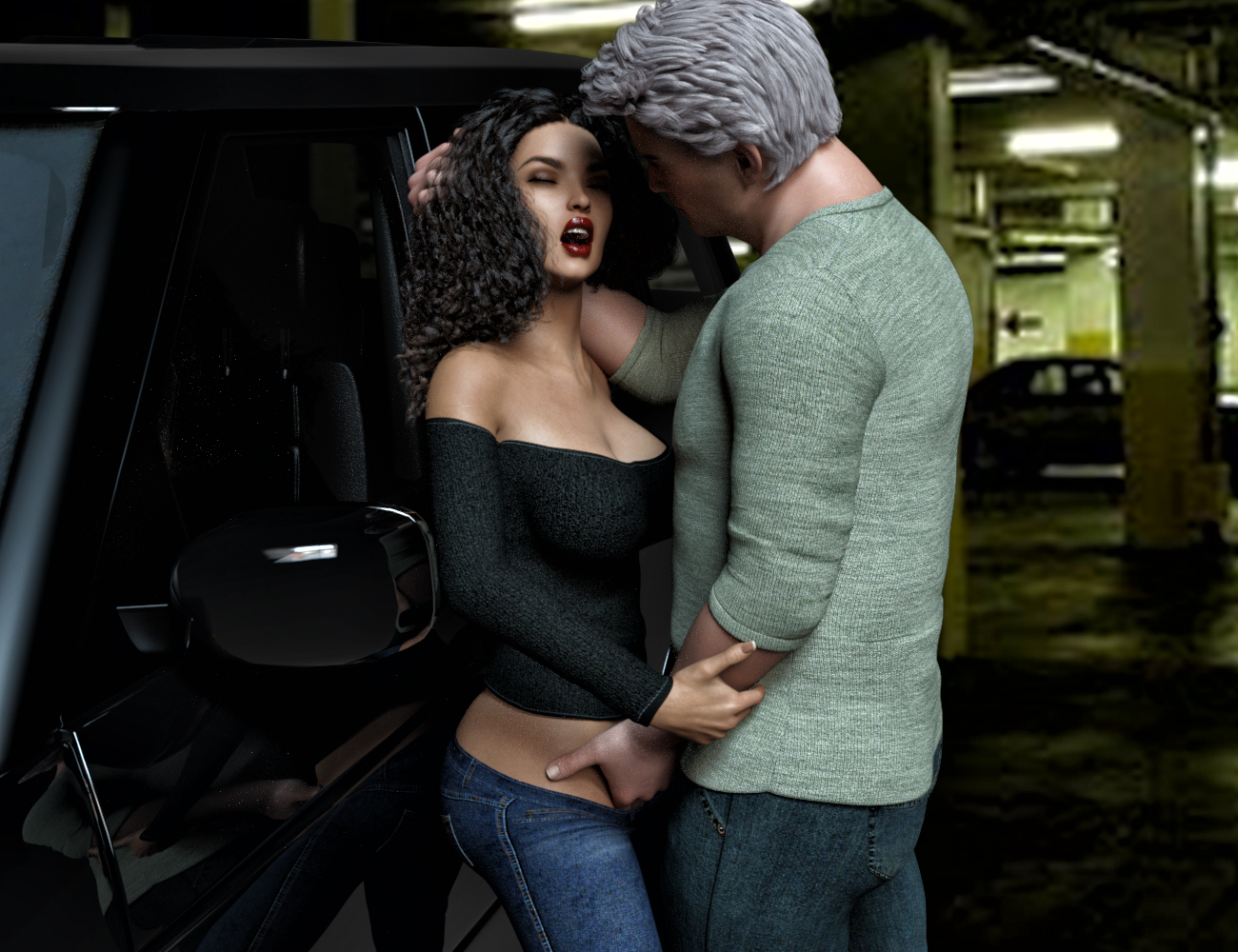 Lilah arrives at the bar filled with the butterflies and nervous excitement that comes with meeting a potential lover for the first time. Her date, Mason, is a tall, handsome man with a sturdy build that has designs on becoming Lilah’s Bull. As hoped, the chemistry she felt while messaging with Mason is carrying over in person.

A couple drinks in and the sexual energy is starting to flow as Mason leans in to taste her inviting lips for the first time. She likes the way he kisses – slow and sensual. Kissing is important to Lilah because she knows it correlates well with the chemistry she will feel for a man in the bedroom. The kissing continues and she feels an extra tingle being in public like this with him. Did anyone notice their casual first greeting and now see them kissing? Her thoughts drift to me and the erotic scenario now unfolding within our loving relationship.

Encouraged by Lilah’s response and aroused by her kisses, Mason suggests they go to his place. She does wants to go his place one day soon, just not tonight. “I can’t have sex with you tonight because I told my boyfriend I wouldn’t.” They continue chatting and kissing throughout the evening. With the date coming to an end, Mason walks Lilah to her car and leans in for a goodnight kiss. Lilah feels flushed with excitement as this giant of man presses her against the car to have one more taste of her full, sensual lips.

Lilah’s earlier desire to not have sex with Mason is melting away as he presses for more. “Are you sure your boyfriend would be mad if you fucked me? Isn’t this what he wants?”  Lilah remembers that she actually did talk about to me about this and I had given her the green light for more if she felt it. Lilah isn’t sure what she is feeling but knows she doesn’t want the night to end…not yet.

Mason slips his large hand inside Lilah’s pants and rubs a thick finger along her clit. Her dripping wet pussy feels like an invitation for more as Mason eases a thick finger inside inside Lilah. Soon he is finger fucking my girl and working her g-spot. Out in public view, Lilah experiences the rush of exhibitionism and exhilaration of a new man’s touch. Soon, her hips are rocking as her legs begin to shake. She is shocked by how her body is responding so quickly to him and feels so naughty. Mason is gripping her hair, finger-fucking another man’s woman, and making her body sing as she cums…for him.

His own arousal is now demanding attention. Still out in public view, Mason frees his cock and Lilah quickly wraps her tiny hand around it. She marvels at how long and thick his manhood feels in her hand. My lover’s sexual surrender to another man appears imminent as Lilah invites Mason into the back seat of her car. He quickly resumes working her tight pussy with his strong, thick fingers as she comes several more times.

The Dom behaviors that Mason had been holding back on are beginning to rise along with his hard, strong cock. He seems to be picking up on something with Lilah. Perhaps there is a submissive girl inside her aching to be dominated?  Lilah and I enjoy occasional D/s play but she has never expressed interest in a man being dominant with her. Mason directs her to look at him while she comes and she obeys. He encourages her to “let it go” and to say “please” when she wants to cum again. He affirms her for being a “good girl” and coming as directed.

I could tell he was a Dom by some of the things he said, but it was subtle and felt okay. He told me to say please and thank you a lot too. I did. I’m wary of Mason being a Dom, but he played it well tonight. I really enjoyed the subtly dominant things he did.

After getting Lilah off a few more times, Mason once again presents his thick, long cock to Lilah. She immediately begins to lavish attention on Mason’s big cock and is generous with compliments about his size. He seems intrigued and asks about the comparison that Lilah herself was no doubt making. “Am I bigger than your boyfriend?” Lilah excitedly answers, “Yes, you’re bigger…a lot bigger!”  Lilah has always enjoyed indulging my small-penis kink, but now it is feeling extra hot to her because it is real. Lilah is on fire in the presence of another man’s larger cock.

Baby, his dick was so big and thick with such smooth, soft skin and a big pretty head. I wanted him in my mouth immediately! You know I had to! Mmm, he tasted so good! It isn’t like a monster-sized cock, but he is definitely big and much bigger than you.

Emblazoned by her excitement and early signs of obedience, Mason becomes more dominant. “You like this big cock in your mouth.” Lilah moans in agreement. He directs her to say thank you while her mouth is still full of his thick cock. The moment is surreal for Lilah because she is such a strong, smart, independent woman. She never imagined she would be in the backseat of her car thanking a man for “allowing” her to suck his cock. Yet, here she is struggling to do her best to thank Mason for having his cock in her mouth.

Baby, he kept asking me if he was bigger than you. I had to answer yes every time because he is and it made me hot to tell him so. He said things like, “Do you like this big cock in your mouth? Say thank you with your mouth full.” Sometimes I complied, but sometimes I was defiant. You know your girl – I’m not one to be completely bossed around…except by you and only sometimes. 😘

Lilah is enjoying the sensation of this newfound thickness in her mouth but wants – needs – to feel him inside her tight little pussy. Disheveled, sweaty, and oh sooo wet, my lover sits up and straddles Mason’s lap.