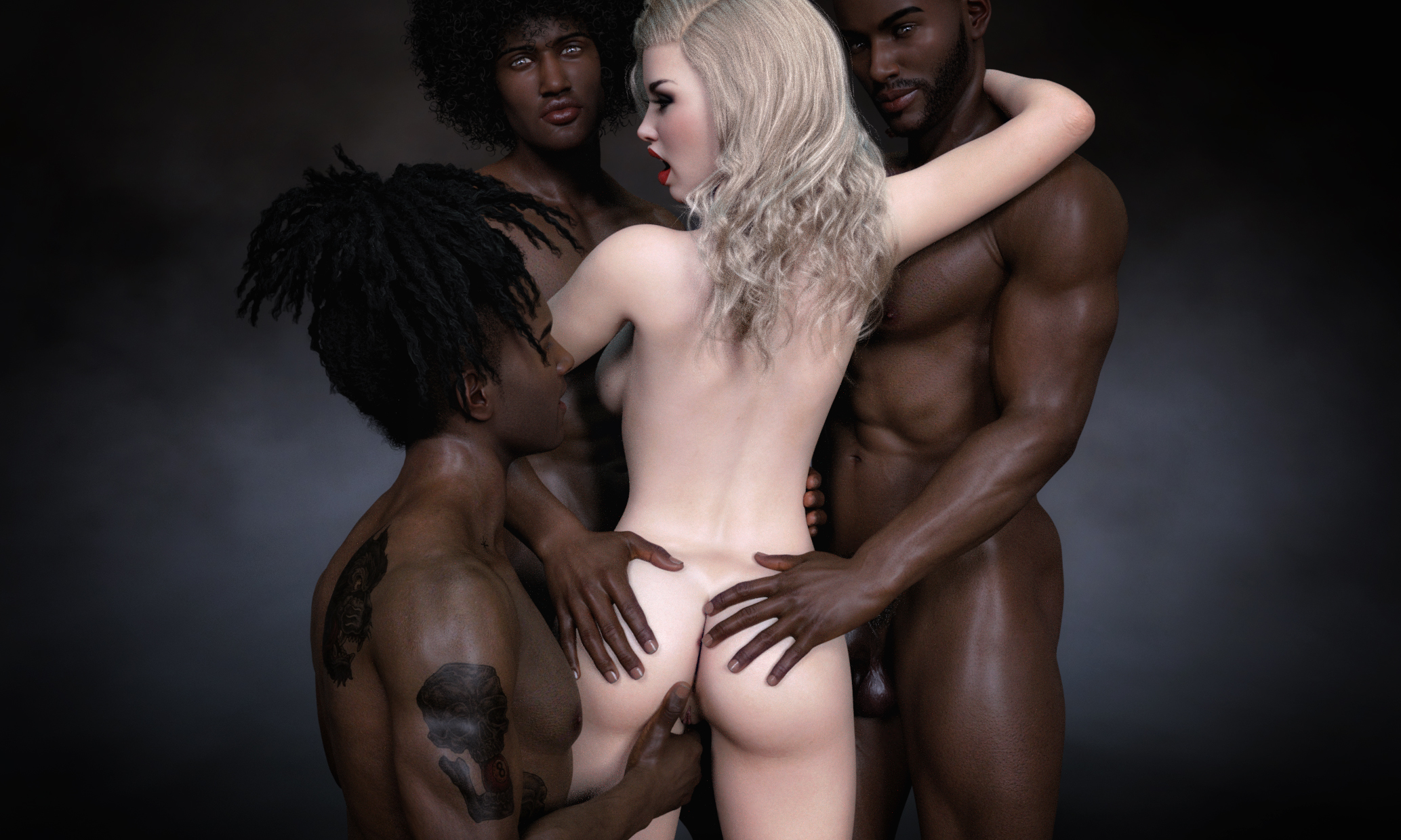 Black Mystique – Presence, is the first in a short series exploring the psychology of interracial sex (as a sexual kink) and the near mythological presence of “Big Black Cock” in our sexual psyche. Along the way, I am also trying to unravel how the desire to watch my lover with well-endowed black men evolved as a favorite fantasy of mine and, surprisingly, how many of my past lovers have also revealed this secret fantasy to me.

Whether we want to admit it or not, “Big Black Cock” has found a place in our sexual psyche. I don’t watch a lot of TV or movies these days, but I am frequently exposed, even if subtly, to references of black men being well endowed and the implication of superior sexual prowess. There is a fair amount of research on this topic by professionals exploring the presence of this phenomenon in our modern culture. These articles feature long lists of references in TV shows and movies that continue to fuel the presence of black male endowment and sexual prowess in our sexual mythos. Like it or not, its presence exist in mainstream popular culture.

Jennifer Anniston adds to the presence with “Big Black Dick” and “Big Black Cock” references in We’re The Millers.

If we step away from the sexual mainstream into the world of sexual kinks, the presence of big black cock is even more prominent. Neuroscientists Ogi Ogas and Sai Gaddam analyzed one billion sex-related search terms as research for their 2012 book, A Billion Wicked Thoughts. They found that cuckold-related searches rank #2 among most searched for sexual content on the internet. Ogas and Gaddam drilled down even deeper. After gaining access to the database of a popular cuckold erotica site, they identified the following as the most common two-word search phrases: Black Cock #1, Black Man #2, and Big Black (Cock) #6. As another point of reference, PornHub’s 2019 year in review lists “Ebony” as the fourth most viewed category by women.

How the presence of BBC in our sexual psyche came to be is a pressing question for me and one that I have given serious consideration. One stop on my journey takes me to our nation’s founding and the intersection of Puritan beliefs and slavery. The founding of the United States, to a large degree, was heavily influenced by Puritan beliefs. I am admittedly not an expert in Puritanism, but from what I have gathered, it seems that the characteristics of moral and religious intensity, responsibility, hard work, independence, self-reliance, and self-control are cornerstone beliefs of Puritanism. To the extent one can embody these traits, God will reward the good and punish the evil doers.

These Puritan expectations extended not only to the individual but also to the community and the nation. Salvation required that not only should the individual remain in good standing with God, but “he” must also do all in his power to ensure his community remains in good standing. Prosperity, awarded by God, will be a sign to the doer of good deeds that he will find salvation. It was the responsibility of men in early America to ensure his own morality and religious zeal as well as that of his wife, children, and community. The early American held these views and aspired to build a nation founded on these beliefs. Those early beliefs still linger prominently in our culture.

It isn’t uncommon to come across articles by European writers that characterize Americans as being morally uptight and prudish. I think most Americans will acknowledge the prudishness around us. Some consider it as good and moral while others not so much. Still, it is very present. This shouldn’t be surprising given that less than 100 years ago there was still enough Puritan support to drive a nationwide constitutional ban on the consumption of alcoholic beverages from 1920 to 1933. Moral considerations aside, having a strong work ethic (perhaps too focused on work) and being both self-sufficient and self-reliant are also American traits rooted in Puritan beliefs. I still believe most Americans are all in on this one. The echo and reverberation of our early Puritanism can still be heard and felt in America. When it comes to our sexuality, it can feel very restraining.

Drifting back again to the founding of our nation, the expectations of religion and self control had a powerful impact on our perceptions of sexuality – sex was a sin and should be oppressed. Sex outside of wedlock was clearly viewed as a sin. Even sex for the sake of pleasure among married men and women was of questionable morality. Early elected officials went so far as to pass laws against certain types of sexual positions or acts between consenting (even married) adults. Though not enforced, some of these sexually repressive laws of yesteryear still exist as laws today in some states.

Women of this period were viewed as off-limits, sexually. A woman was to expected to remain pure and angelic. Women were figuratively placed on a pedestal of moral purity and above primal, animalistic desires such as sexual pleasure. The romanticized notion of Courtly Love which was driven by love and admiration without physical intimacy was alive and well in America. A woman of high moral standing should not be degraded with sexual intercourse. It was morally wrong for men to encourage her sexuality, and it was morally wrong for a women to desire such sexual relations.

Even today, we still wrestle with his. Relationships, even if sexual, “should” exist as sexually monogamous. We also sense an odd psychological friction when women flaunt their sexuality or exhibit a drive for sexual fulfillment. “Good girls” don’t behave like that and, if they do behave in this manner, they are shamed. I explore this in Cognitive Dissonance: Hestia vs. Aphrodite.

Embedded within this aspirational state of moral purity, we have the Nation’s original sin – slavery. The way black men (and women) were treated and talked about in this period was as negative as one can possibly endure. It is beyond reasoning away how this was ever considered moral in our society. In the Puritan view, black Americans (through no fault of their own as slaves) represented everything that Puritanism was against. As this relates to sexuality, black men were said to be “hyper sexual” with over-sized sexual organs and no self control. And, if left to their devices, what these men wanted most was to figuratively split a pristine white girl in two with his huge black cock.

In The Last Taboo, published in the NY Times, Wesley Morris discusses a letter penned by Pennsylvania lieutenant in 1781 after this visit to a Virginia plantation. He was served by teenage boys whose penises were clearly visible beneath their immodest clothing. The plantation’s owner thought nothing of it, but the lieutenant described his shock in a letter. “I am surprised this does not hurt the feelings of the fair sex to see those young men attending to them with their whole nakedness exposed. I can assure you, it would surprise a person to see how well they are hung.” Mr. Morris suggests that abolitionists and others sympathetic to plight of black people in that period were equally enthralled with advancing stories showcasing black men as excellent lovers and being well hung.

In the early years of America, we find ourselves in a sexually repressed white America with “hyper-sexual, well hung black men” present. White men still aspired to interact with white women in a chivalrous way that honored Courtly Love and their angelic purity. Deep down inside though, these men knew their own lustful cravings and suspected the women also had similar sexual desires that needed to be kept in check. These men knew that if they weren’t being sexual, the black men would be more than willing to step and fill that void.

So, here is the tricky part that addresses the issue of interracial cuckolding and the occasional assertion that this is a racist sexual kink. I do believe that the sexual mythology of the black male’s sexual prowess and big black cock took root in a time of slavery and explicit racism. Those who (even if not slave holders) cast the sexual prowess and gifted endowment of black men as negatives in an effort to deter the interest of white women may have been racists. At a minimum, they were prudish zealots. However, the emergence of white women (and women of many ethnicities) fantasizing and craving big black cock isn’t a racist desire. If anything, it a reaction to or rebellion against racism. Her desire flows from being sexual repressed and her longing for the sexual fulfillment she cannot achieve with her lover (who is also sexually repressed).

This also pertains to couples wishing to step outside monogamy. When a couple is wanting to take a sexual adventure on the wild side and rebel against societal sexual oppression, there may not be a bigger “fuck you” than a wife or girlfriend spreading her legs for a well-endowed black man as her husband or boyfriend looks on. The scene thumbs its nose at stuffy Puritan ideals, embraces sexual liberation in the pursuit of ultimate sexual fulfillment, and rejects racism in the most intimate of ways.

There is no doubt that black men throughout the history of America (and in other parts of the world) have endured a lot…far too much. One African-American scholar suggested (in the midst of outlining a long list of negatives) that arguably the one positive thing may have come out if it is that black men, in general, are perceived in modern culture as being better at sex and more endowed than other men. Some black men see this as good and others not so much. There is also a popularization of black culture and hyper-consumption of black masculinity throughout the world. In some ways, black men have come to symbolize sexual prowess in the sexual psyche of not only white men and women, but also in other cultures. And, it is seen as a positive attribute.

My pussy needs some attention…it’s getting beyond the point of needing attention!!!! Now it’s dire!!!! You need to keep girls like me in line! Our eager white pussies need to be tended to or we will end up lost in crazy BBC orgies!!! I will have black men like Jalen sneaking in to fuck me and give me what I need. And, I will be getting lots of others girls in trouble by encouraging them to succumb to their dark desires. Black men have the long, thick dark cocks I crave, and I have what they want – tight, naughty white girl pussy, mmmm!!! ~ Sienna

There is more to the Black Mystique though which I will pick up in the next part of this exploration. Sexuality is an innate human drive and part of the human experience. This space in our sexual psyche that in some ways is now filled by the mythical Big Black Cock is the morphing of an archetypal dream that has existed throughout history and once worshipped in the old-world gods (like Dionysus) before the rise of Christianity and the perception of sex as a sin.