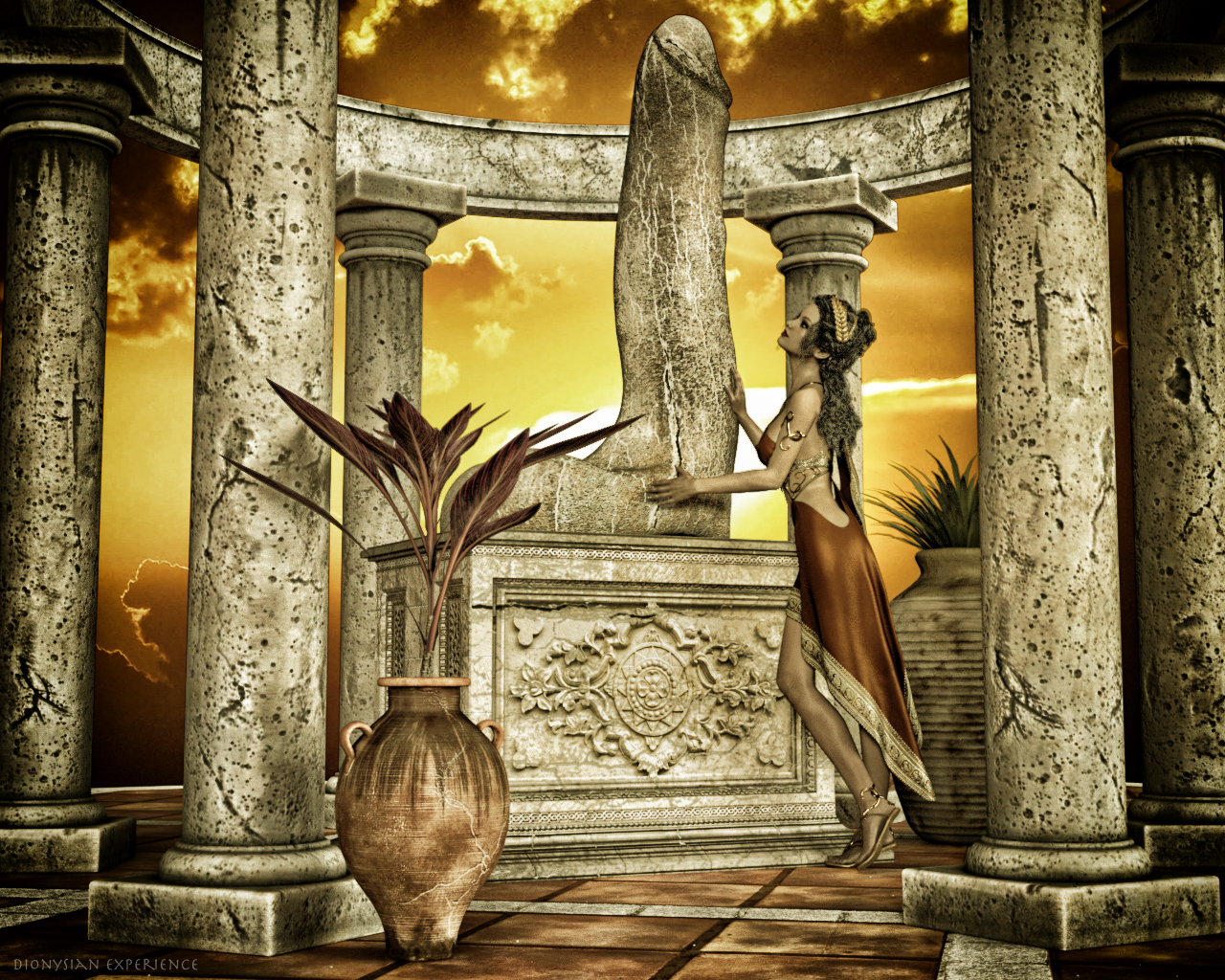 A large, erect phallus is symbolic. It suggests a powerful and overwhelming force, an irresistible intoxication, and the mystery of sexuality. It can be frightening in its symbolism when viewed as representing male dominance and control over women in a patriarchal society. In contrast, it can be intoxicating to women who long to express and experience the full potential of their sexuality and attain transcendent ecstasy.

In ancient Greece, the erect phallus was worshipped as a symbol of Dionysus. Statues of erect cocks were even placed at sites devoted to Dionysus. What, really? People (mostly women) in a seemingly advanced society like ancient Greece worshipped an erect cock? How can this be? Let’s take a deeper look at the meaning behind this.

While we have made improvements in gender equality across different cultures, many of these advances have only come to exist within the last 100 years and, even in the most modern societies, there is still a long way to go. Even worse, there has been little progress at all in some cultures. If this is the state of the world today, can you imagine how oppressive life must have been for women in 800 BC…almost 2,800 years ago? We can catch a glimpse of this in literature from ancient Greece.

Women of this era were bound to household duties and were expected to follow, not lead. They were expected to be sexually passive and free of lust while men controlled the selection of sexual partners and lived a life of sexual freedom. Hmmm, doesn’t sound like a lot has changed in the last 3,000 years. There were, however, a couple of recurring exceptions to the oppressive status quo and they came courtesy of the Greek god, Dionysus.

Dionysus, mostly commonly known as the Greek god of wine, theatre, and divine ecstasy, served multiple psychological and spiritual roles in Greek society. Dionysus is often expressed through one of the most powerful of all rituals, the psychological and emotional ritual of inversion. Rituals of inversion were practiced privately and also celebrated in large public festivals honoring Dionysus all across Greece.

What exactly is inversion? Our day-to-day life is governed by social codes, our individual self concepts of identity, and behavioral norms. This is the structure of civilization and, through the lens of Greek mythology, is the realm of Apollo. The opposite of structure is anti-structure. And, between these two polar opposites we find a disorienting mix of both known as inter-structure. The realm of Dionysus exists here in the inter-structure which is consistent with the Dionysian concept of duality and tension found between two opposing edges.

The Greeks ritualized inversion through festivals celebrating Dionysus. The festivals served as great levelers of society where all social barriers and status were dissolved all treated equally. This means that some people rose in prominence and others were diminished. Slaves were exalted and free men were humbled. Man or woman, young and old…all return to a state of cultural indistinguishability.

During these festivals, women assumed the status and liberties enjoyed by men in Greek society. This ritualistic invoking of Dionysus liberated women from the societal constraints that, to a large degree, oppressed them. This included sexual independence and, in modern lingo, the ability to get wild and party!

Festivals honoring Dionysus often began with a phallic procession. As I read about these, it sounds a lot like Mardi Gras. People lined the streets with loud music of the period filling the air, people screaming, wine flowing liberally, and people generally working themselves into a frenzy. In the procession, groups of people (mostly women) walked down the streets carrying large phallic symbols in honor of Dionysus. In a sense, it was like divine foreplay.

The Greeks saw erections as a sign of divine possession by Dionysus. Plato even referred to it as one form of divine madness. The phallus represented the surging of life, the need to gush forth, and seemed to have a mind of its own. Even today, men and women still joke about erections when referring to a man “thinking with the other head”. The Greeks were more literal about this. The erection was seen as a disobedient, self-willed animal that would not listen to reason. It takes possession of the owner and reduces him to a bestial state. To this end, the phallus is often depicted in Greek art at zoomorphic…having animal characteristics/form. It is sometimes shown as a bird with wings, ears, and a single eye.

Likewise, the phallic tribute to Dionysus carried in processions was regarded as an independent living organism and often had an eye. The Greeks believed that through the eyes and phallus, we become possessed and surge forward to take possession. In these phallic processions, women were taking possession of the phallus and invoking the divine possession of Dionysus in themselves. They sought the god’s presence and wanted to claim the wild, liberating power of Dionysus in order to step beyond oppressive societal boundaries. Once possessed, expressions of joy and pleasure such as wild dancing and/or sex ensued as these women experienced the intoxicating, transcendent ecstasy of Dionysus.

Note: In the midst of all this revelry, Greek literature never depicts physical harm occurring to women worshipping Dionysus. Instead, he is said to have actively protected the safety of women who possessed him.

Almost 2,000 years have passed since Dionysus faded from our collective consciousness and left us with a sense of cognitive dissonance. How many women still feel oppressed with no moments of liberation on the horizon? How many women long to be free of societal judgement for being a sexual being? How many women struggle with the homemaker dream of Hestia but long to touch their inner Aphrodite? How many women still long for passion but are denied? How many women yearn for the transcendent ecstasy of romantic love and spiritual intoxication? We feel this void in our lives.

Most of us understand what society expects of us and understand our identity in this structured Apollonian existence. Some of us though can see and feel the other side. No, we don’t want the full anarchy of anti-structure. What we long for is the disorienting and pleasurable tension of the middle realm represented by Dionysus. As an archetype (a psychological construct), Dionysus still exists in our psyche and is perhaps needed more today than ever before. We just need to learn how to touch it…in moderation.

I’ll end this exploration with a quote that has always fascinated me. Now, its meaning is beginning taking shape.

Go ahead, drink the juice…it’s good for you.

Interested in reading more about Dionysus? You can find them all here –  Dionysus.

Sources of note used in this writing along with countless other books and articles read over the past few years in my journey for deeper understanding: