Dionysus – The Rise and Fall (and Rise) 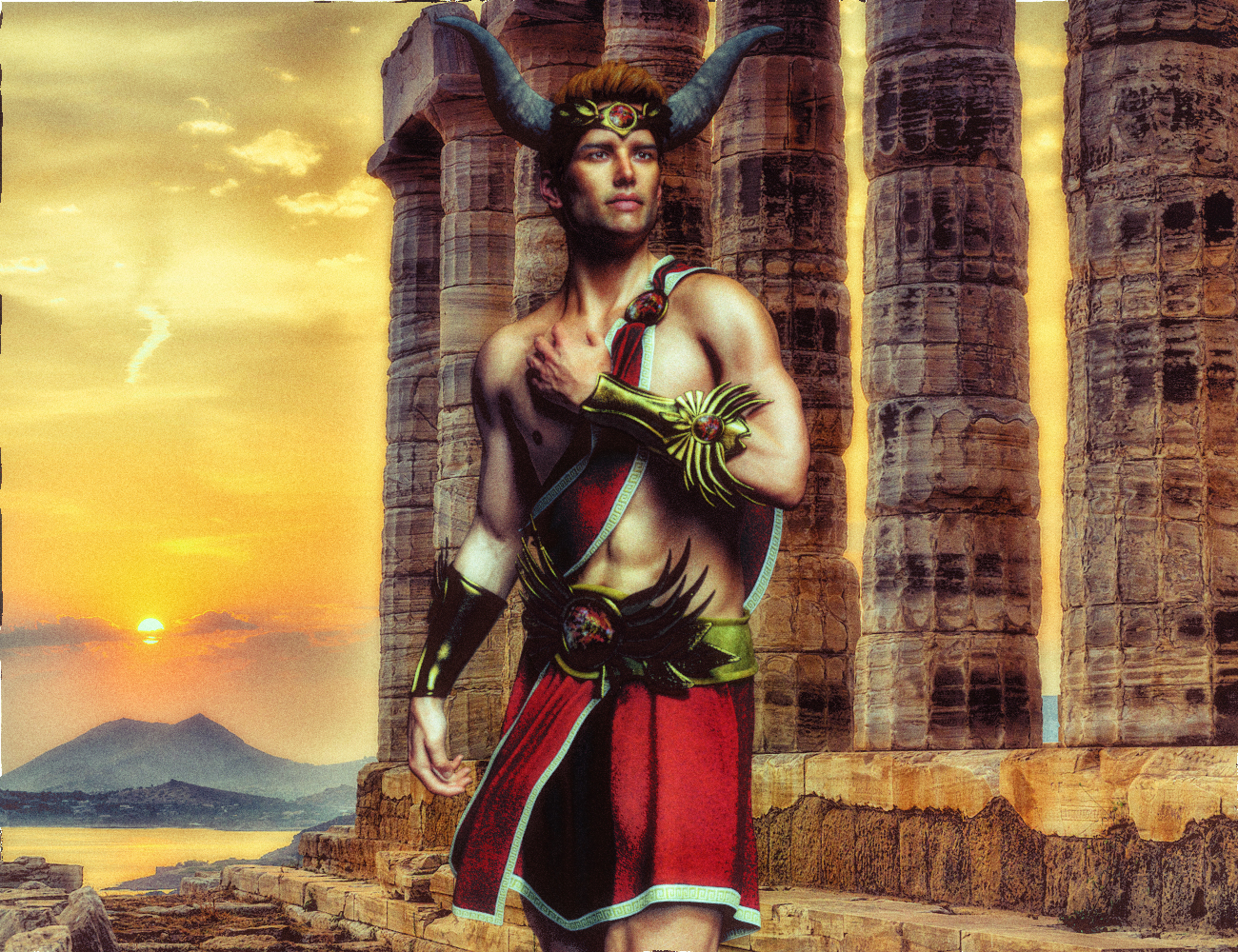 Disclaimer: My exploration of the rise and fall of Dionysus is a work in progress. While it necessarily touches on religion (Greek mythology and Christianity), my inquiry is more about the passing of time and how Dionysus (as an archetype was suppressed).

Musical Accompaniment: Cold Play, Viva la Vida or Death and All His Friends

How does a seemingly magnificent culture like ancient Greece fall after attaining such heights of grandeur and enlightenment? More specifically, what became of the Greek god, Dionysus? To the Greeks, Dionysus was the god of wine, patron god of the theatre, spiritual ecstasy, fertility, flow of energy in the dancing universe, and the cycle of life. To touch Dionysus was to enter into the realm of the spirit and experience the transcendent ecstasy of union with the divine. How did he fade from the spiritual world of the Greeks and all those who once honored this god?

The worship of Dionysus wasn’t an obscure cult following. His influence had spread across Asia and Europe with an impassioned following by 1300 BC. Traces of Dionysus are found in gods of ancient civilizations (Crete, Egypt, and India) predating this period possibly as far back as 8,000 BC. By 600 BC, the Greeks had placed Dionysus among the pantheon of Olympian gods. The Greeks had temples, rituals, and multiple festivals dedicated to Dionysus.

These Greek city-states fought against one another for power and control. Intermittently, they also sought the aid of Rome in these conflicts. That is, the Romans would serve as an ally with a Greek city-state in conflicts against other Greek city states. Compared to the Persians, for whom the Greeks often united and fought against as one, the Romans were viewed by the Greeks as being somewhat similar in culture to themselves and not an inferior or oppressive society. Through a series of wars and alliances over four centuries between approximately 300 BC – 100 AD, Greece was ultimately absorbed into the Roman empire.

Life in Greece under the Roman Empire was much the same as it always been. In fact, it is was the longest period of peace the Greek’s had experienced and it was also a period of great prosperity. Culturally though, it was as if Greece had conquered Rome. Greek language became a favorite among the educated and elite in Rome. Greek literature, philosophy, and architecture were also widely embraced as well as elements of the Greek gods. Many temples and public buildings continued to be built in Greece by Roman emperors and wealthy Roman nobility to include sites dedicated to the Greek gods.

While the Romans perverted Dionysus into Bacchus, they elevated Apollo, the god of light, who had at one time been honored equally with Dionysus at Delphi. Apollo gradually came to represent analytical thought and the preservation of law and order. The chief god was now officially found in the sky as the sun god, Apollo.

On Earth, the influence and celebration of the nature god – Dionysus – was marginalized by the ruling powers. The unpredictable, irrational, ecstatic Dionysus had no place in this scheme and became the enemy of it. Still, Bacchus had a devoted, organized, and well-funded following of women known as Bacchantes. These women were known as Maenads in ancient Greece.

The worship of Bacchus eventually reached a state where the controlling power viewed Bacchus as a destructive force of divine madness and a danger to the Roman state. Around 186 A.D., the Romans began systematically to persecute the worshippers of Bacchus–the Bacchantes. The Bacchantes were charged with immoralities and crimes and thousands were executed. The Roman senate eventually banned the Bacchanalia—which had formerly been the very popular Dionysian festivals.

The Rise of Christianity

As Roman control of western Europe fell to the Visigoths in 400 AD, much of the eastern Roman empire remained with its strongest base in Greece. During the period 100 – 400 AD, Greece and much of the remaining Roman empire came under the influence of early Christianity. What became of Dionysus in this time of Roman influence and the eventual adoption of Christianity?

With the rise of Christianity in the Roman empire, depending on source you read, both Bacchus and Apollo were eventually cast as the devil. This reflect the divine madness of Bacchus but fails to capture the zoe (spirit of life) and transcendent spiritual ecstasy of Dionysus that the Greeks embraced.

Christianity restored balance to the ecstatic transcendent principle in the figure of Christ. We see here that dual-natured Dionysus—as a psychological archetype—was split in half and channeled into both the Devil and Christ. Dionysus was both to the Greeks. Archetypes are timeless patterns of human thought and dreams.

The break in the duality of Dionysus as a consolidated archetype presents some of us with psychological challenges…especially when it comes to sexuality. Some of us feel shame about our physical desires because we want to be “good” people. Perhaps we feel unworthy of divine spiritual ecstasy because we have impure thoughts. We have a sense that we in some way should be suffering and sacrificing in our worldly existence to reap rewards in the afterlife.

The Greeks, through Dionysus, didn’t have this cognitive dissonance because sexuality wasn’t viewed as a “sin”. It was a necessary and encouraged aspect of human nature. The Greeks believed in celebrating life and attaining states of transcendent ecstasy on earth, touching the divine for moments in preparation for the afterlife.

Psychologically, the loss of Dionysus as a unified archetype is also the triumph of rationality over irrationality; thinking over feeling; the concrete “masculine” ideals of power, aggression, and progress over the intangible “feminine” values of receptivity, growth, and nurturing. It is the elevation of Apollo by the Romans as patriarchal religions gained in power as the displacement of the matrifocal ways of Dionysus were discouraged, diminished, and finally lost.

Perhaps it was necessary to suppress Dionysus – certainly Bacchus – in order to nurture the rational, organized, knowledge-seeking world of Apollo and attain the progress we have made. But, it has come at a cost and there seems to be a unfulfilled spiritual yearning rising in our collective unconsciousness…even in emerging in our consciousness.

Symptoms of denied spiritual ecstasy (madness) are also on the rise and we see it daily in the news as madness envelopes individuals and even portions of some societies. There is however an emerging and counter-balancing force. The rising popularity of Yoga, mindfulness, ecstatic dance, meditation, and eastern philosophy/practices are examples of more people seeking deeper spiritual connection and meaning. The latter is a rising current of Dionysian energy.

When I first began my journey for deeper meaning, I carried around a vision in my head that I couldn’t quite get my mind around. It was filled with contrast and duality. It existed on the edges of spectrum with opposing energy forces that created a wonderful tension in the center. It was light and darkness, sensual and primal, and almost any two opposing forces you could imagine. At the time, I wasn’t aware of Dionysus and created this piece of digital art.

I’m still fascinated by this work and how so many elements of Dionysus are flowing through it…to include the zoomorphic vision. You see, archetypes are timeless patterns of human thought and dreams. The don’t die, they simply morph with time to return to us in different forms and with different names.

Sources used to inform this writing:

7 thoughts on “Dionysus – The Rise and Fall (and Rise)”