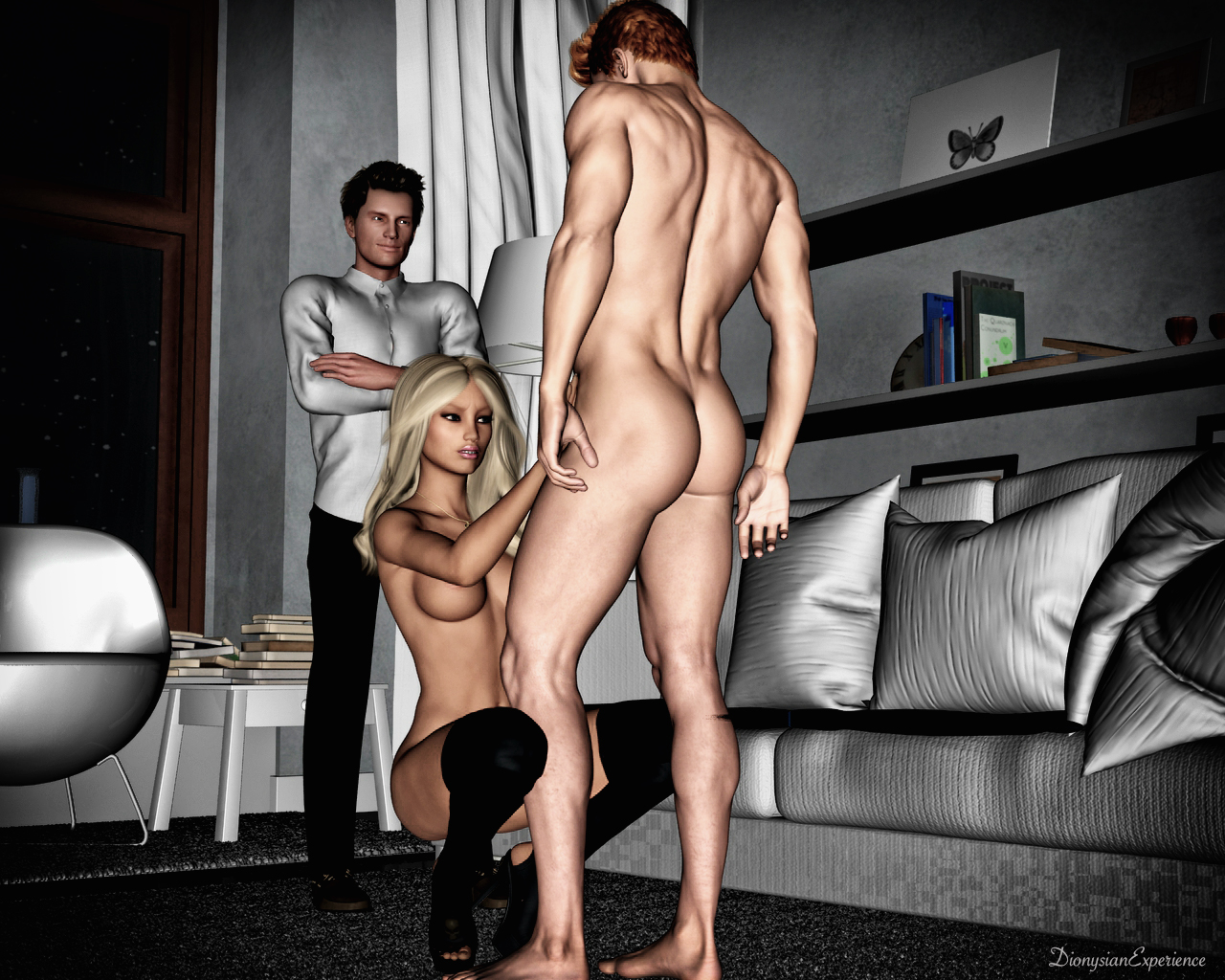 This story picks up where American Gigolo ended. In that post explore the influence of the movie “American Gigolo” on my sexual awakening. As that post ended, I was being “courted” by Jenna and Roman. Jenna sent me a not-so-subtle email and let me know Roman’s biggest fantasy was to watch another man fuck her.  If I was interested, she wanted that man to be me.

I accepted and in a few weeks I was flying to San Francisco to see them. We met for dinner as a way to get reacquainted and ease into the evening’s feature show. Jenna looked fantastic and I was more than eager to zip through dinner and get back to their place. After what seemed like an eternity, the check came. I offered to pick up the tab but Jenna stopped me. “I want Roman to pay for your dinner tonight. It is part of the experience.” I liked that. He was showing gratitude for my services.

The cost of living in San Francisco is very high but they still had a really nice home. As I mentioned in the previous post, Roman was doing well professionally. Jenna made us drinks before leaving to freshen up. She came back wearing a tiny, low-cut dress with thigh-high boots (as I requested) and even darker eye makeup. Jenna looked amazing…for a wife about to be fucked by a “stranger” in front of her husband. Honestly, I really couldn’t believe this was happening. Her full blonde hair looked wild and sexy. Her blue eyes were framed in dark eye shadow and long, sexy eyelashes that looked like butterfly wings with every blink. She looked hot and deliciously slutty…and I mean that in a good way.

Jenna really liked her boots and said she had enjoyed taking Roman with her while shopping for them. “I needed a man’s perspective. I would try on different pairs and ask Roman if he thought you would like them.” I assured her that I REALLY like them! Roman must have been so turned on knowing his wife getting dolled up to look sexy for another man. I’m sure they fucked like crazy after that shopping trip.

As the photo session ended, I took control. I eased my body against Jenna and we touched a little before kissing. She resisted slightly as it must have been surreal for her to be touching and kissing another man…in front of her husband. Her lips slowly parted to accept my initial advance. Her resistance quickly melted away as the heat rose between us and soft sounds of moaning began to fill our space. Roman watched intently as I took control of his wife and familiarized myself with her charms.

I was very much into the mindset that I was fulfilling a role. Roman was going to watch me dominate and control his wife. I gave him good views of my hands all over her breasts and ass. I turned her to face him as I removed her dress. Jenna made a passing comment that it had always been her fantasy to be naked in a room with fully dressed men. I cupped and squeezed her breasts…tweaked her nipples. Her head fell back and rested against me as she surrendered to the moment. I asked if she shaved or waxed her pussy as I had requested. Jenna was melting in my arms and said, “Yes, I had my first waxing and I haven’t let Roman touch me. I did it for you and you are going to be the first one to enjoy it.” Taking control of Jenna’s pussy like this was, I’m sure, quite a mind fuck for Roman. His wife, my fuck doll.

I turned Jenna around so she was now facing me. “Show your husband what you have been fantasizing about.” Button by button she slowly opened my shirt. Her hands flowed across over my exposed chest, stomach, and back in a deliciously sensual manner.  Sliding her hands up towards my shoulders, she slipped off my shirt and it fell to the floor. Roman watched his wife undress me…just as she has done to him so many times over the years. She kissed my neck while squeezing my chest and pressing her hips into mine…I could tell she was getting hot. Her kiss trailed down and across my chest to my nipples as she playfully sucked and softly nibbled on them.

I took Jenna’s face in my hands and looked into her glassy eyes, “Get down on your knees and suck my cock.” I imagined the intense emotion flowing through Roman as another man commanded his wife to get on her knees. She obeyed. Jenna licked and kissed her way down my stomach before kneeling before me. This was an intensely erotic moment to have another man’s wife on her knees before me with her husband looking on. She seemed to savor each moment as she removed my belt and moved closer and closer to releasing my manhood…and her imminent sexual pleasure.

Roman had a front row as my cock sprung free and stretched out strong and proud before his wife. Releasing a sexy sigh and moan, Jenna buried her face near the base of my cock and balls and seemed to be inhaling my scent. Her nose traced the length of my sex on both sides before following the same path with her tongue. Gently cupping my heavy balls, she began softly slapping my meaty shaft against her face and lips before hungrily sucking and doing her best to deep throat me. Jenna was wearing her wedding band and engagement ring. I wondered if either of them found it erotic to see that jewelry and what is symbolizes as it pressed against another man’s cock. I did.

I also kept an eye on Roman. I wanted to make sure he was enjoying the experience, but I also wanted to make sure he wasn’t about to freak out on me. I pulled out of her mouth and rubbed my plump, dripping head across her lips. I adjusted my position a little, “Look at your husband while you suck my cock.” I knew it must have been incredibly intense for them as well to be making eye contact with her mouth full of my cock.

I lay Jenna back on the white leather ottoman in their living room. It would have been really hot to fuck her in their marital bed but it wasn’t to be…on this night. At this point, Roman was moving off to the side and grabbing his camcorder. Jenna would later tell me with a little amusement in her voice, “Roman watches the video of that night ALL the time!” Laying Jenna back on the ottoman was quite a sight. She has a fantastic looking pussy…her lips and clit were perfect for my taste. She was soaking wet as I went down…her scent intoxicating. Silky smooth from waxing, she was highly sensitive and seemed to thoroughly enjoy the sensation of a new man between her legs. I could have stayed buried in sex much longer but knew Roman was eager to see more.

I spread Jenna’s legs wide before me as I rubbed my swollen head between her parting silky lips. I gestured for Roman to come in closer for a better look. This was no doubt the moment he fantasized about. His wife was laying with legs spread wide and her pussy dripping for another man’s cock. My cock was hard as steel and ready to storm the gates of her secret garden. I held my position and slid my head around her lips so he could see the exact moment his wife took another man’s cock inside her. Slowly, I eased my cock inside his squirming wife so he could savor every inch of my hot steel disappearing inside his woman.

Jenna came several times over the next hour or so. Roman was fascinated and very turned on that his wife was getting off. I learned she had never come during intercourse…only orally. Roman was working the camcorder, moving around, and rubbing his cock through his pants as I fucked his wife. I paced myself and fought off my own release many times but the tightness and pressure in my balls was building.  I think Jenna was still really enjoying herself when Roman mentioned the battery on his camcorder was about to die. I suspected he must have came in pants already and was ready for this night to be over. Time for me to cum.

I collapsed on top of her for a moment as we both caught our breath. I rolled off and into awkward moment. Typically, I would pull my lover close and touch her…savoring our afterglow. Jenna wasn’t my lover though. I touched her and we shared some eye contact but Roman had other plans.

Roman slide her ass down to the edge of the ottoman and went down on her.  Yes, he buried his face and tongue in her cum-filled pussy. She looked at me and curiously apologized. I have often wondered about her apology and what it meant. That aside, I found this moment super hot on many levels.